The TEA test in action 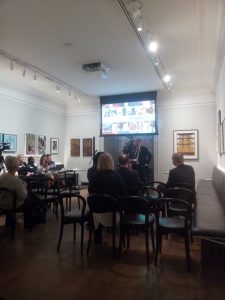 Speaking for Bishop Simeon Trust at the Royal Academy

I remember years ago having the opportunity to meet the Minister of State for Justice to discuss our concerns about the withdrawal of publicly funded legal support for refugee family reunion. He was very clear at the start of the meeting that the government did not agree with our concerns, but he gave me the space to make my case.

I endeavoured to convey the argument that refugee family reunion is not an issue of immigration but one of international protection for refugees. I sought to explain that very often it will be one member of the family, most often the male, who is able to reach a safe country, and then he or she will seek to use refugee family reunion procedures to reunite the family. The importance of this re-unification is to ensure the ongoing protection of all the family members.

It was only when I started telling the minister about a story that I had heard about a brother and sister being physically separated in a refugee camp. It was a harrowing tale of their hands slipping out of each other’s grasp, and the brother then losing sight of the sister. It was at this point that the minister began to get interested and then promised me a subsequent meeting with his officials to discuss what might be possible.

I felt that I had touched him with my story, enthused him that change was possible, and then before I left the meeting got him to commit to an action. In this instance I felt that I passed the TEA test. Admittedly this was just the start – but this meeting had got us up and running.

Can’t find what you need?